The future of Television and the Entertainment Industry...

The future of Television and the Entertainment Industry is Online Streaming.August 5, 2019

Breaking free from the TV-networks and entertainment industry...

From the beginning it had us all spellbound, people were in awe when they saw the first moving pictures silently projected across a large screen, it was the birth of a new cultural upliftment for the masses.

At the start of this new revolution of entertainment, everybody had to go to a cinema complex to go watch the latest release of either a movie, short documentary, or news event. As all things go, it evolved into more sophisticated presentations, silent movies being accompanied by live music, then later sound was added to the film projection itself. But still people had to go to these large venues to watch the latest new movies.

With the advent of television — entertainment, news, and information were brought straight to your home into your living room. Broadcast-technology has provided the ability to transmit multiple TV-channels over the airways and made it possible to be received by a simple VHF aerial, attached to your rooftop, that connected to your television by a coaxial copper cable. An incredible achievement in human history!

Then came the large TV-networks, producing and distributing content that conformed to their views and norms in order to spread their own propaganda, politics, and world news.

The great TV-network wars had began...

These network wars were extremely well illustrated by the satirical TV-series "Max Headroom" which was broadcast in the early 1980's. Some of you might remember the series but if you don't, just enter the following "Max Headroom" into your favourite search engine, or ours namely Groot, then you will see how it depicted the TV-network wars and what they did to drive up the viewer ratings.

Currently as I sit here writing about it, they are still at war with each other, all just to increase viewer ratings in order to sell advertisements... crazy isn't it!

But still with movies, you had to go to a cinema to watch, which later on these television networks would then broadcast, but only after a few months or even years of their first release.

With time came digital television, piping in directly into your home, movies, TV-shows, and all kinds of entertainment from all the different TV-networks and movie studios. The stranglehold of the Entertainment and TV industry was broken. People now had free choice of what to watch in their homes, but at a price.

It gave you the power to choose what to watch and when to watch it. Digital television became a collection of entertainment from all the big TV-networks and Hollywood studios. As time went by, even these new digital content distributors started to enforce their pricing stranglehold onto people, just like the TV-networks had done before them.

But technology and its ever growing ambition to take over the world brought us online internet. (Thank Goodness)

Now that information is freely available on the internet for anyone to access, it was only a matter of time before it would happen to the entertainment industry too. It only took 30 years for us to get there, better late than never I guess, but now we have complete access and free choice to watch and stream what we want from anywhere in the world, straight to our computers, laptops, and even mobile phones!

This then brought us, just like in the beginning, a whole new era of entertainment access. Online streaming had began. New online entertainment tech-companies have sprung up to be the first to provide us with original and licensed content like movies, TV-shows, news etc. Companies like NetFlix, Hulu, and Amazon Prime, just to mention a few. This new online streaming industry has become a success all over the world.

Check out the best VPN for Netflix at VPN Thrive

All over the world people have started to cut their digital and analogue TV subscriptions and signed up to these new content providers, breaking the monopoly that the TV-networks and Hollywood studios had over us.

But like all villains, the TV-networks and Hollywood companies have come back with avengeance to entrap people into their domains and keep them there. At first they enforced GeoBlocking or else better  known as GeoFencing onto the streaming companies to limit content distribution. This did not work as well as they have hoped, people have started to use VPN(Virtual Private Network) software to circumvent the Geofencing they imposed onto the streaming sites. (See our blog post on how to use a free VPN to get around these restrictions)

When these methods of content restrictions failed, they resorted to withdrawing their licensing agreements for their most successful shows and movies from online streaming companies.

Major Hollywood companies and TV-networks have been quick to create their own streaming sites and provided people with exclusive content only to be found on their sites. Companies like Disney and others are now withholding their content, even refusing to licence prime movies (e.g. Pirates of the Caribbean), and TV-shows to other companies in order to dominate the industry and create complete vendor-lock-in.

The more things change, the more they stay the same... remember the TV-network wars?

But like all things rebellious and ambitious, there are those who will always fight to bring back freedom of choice and content. With such tyrannical even despotic and overbearing dominance and villainous actions in the online space, new streaming sites and devices, like the Kodi box and software, have sprung up to provide people with the freedom of choice.

What is now known as stream-ripping, content has now been taken, copied, redistributed, even licensed where available, from these large OverLord companies and are being provided through third-party streaming sites to everyone on the internet, for a price or even for free, while some ask for donations where possible. Online oppression and heavy-handedness will always be fought tooth and nail, or is that by server and router, to gain back freedom!

Well... this is where I shamelessly tell you about our own Stream-TV site where we provide anyone and everyone that accesses it, with all the best streaming sites and content that is available on the internet for free. Our own site is just a portal or directory to these third-party sites. 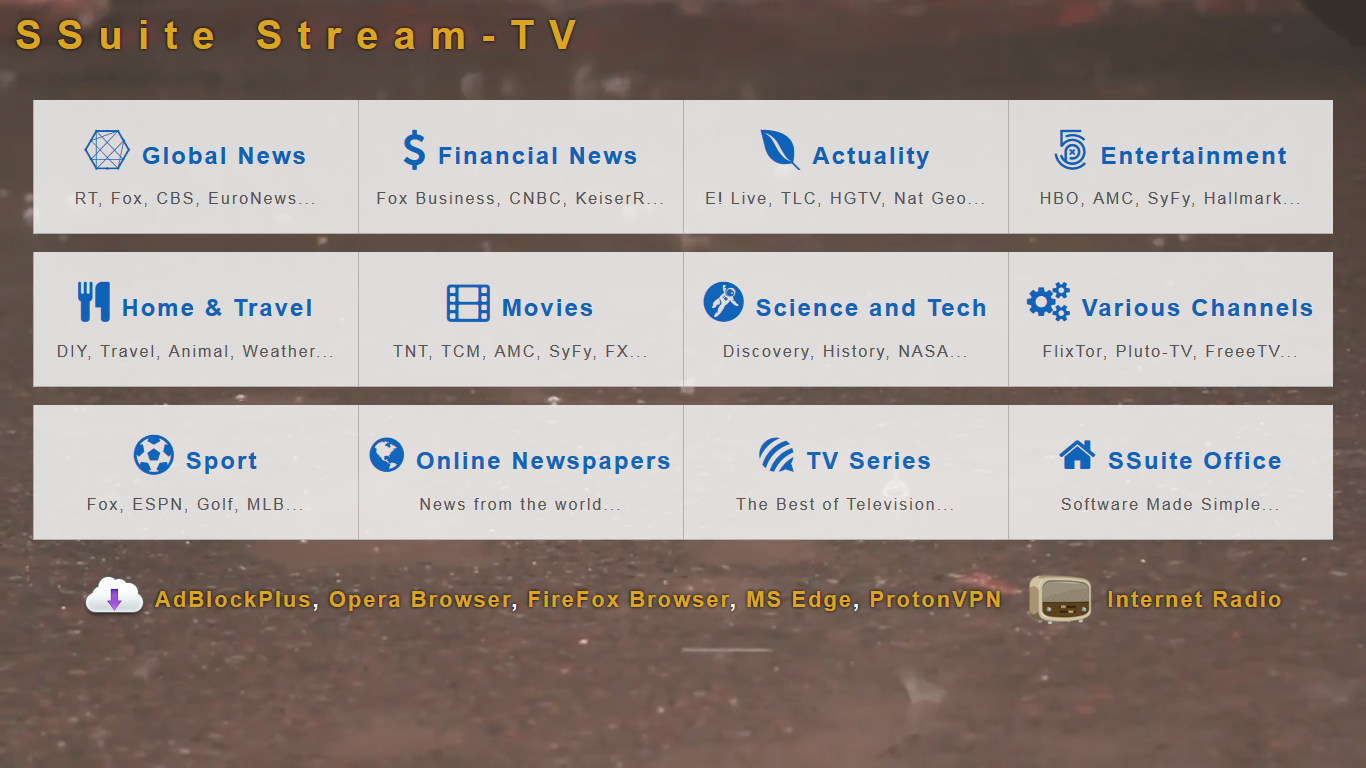 You will find most of the content are from linear TV-channels, most of the well known streaming sites, and even the best movie providers. These lesser known sites have taken the best content found all over the net and other sources and brought them all together for your enjoyment and freedom of choice, as it should be!

So there you have the future of our television and entertainment activities in a nutshell...

Online-Streaming is... Freedom of Choice!

We're just two guys in a garage, what else is new... right?